View from the river

Each summer my hometown is flooded with tourists. Tour guides with their colorful flags held high take their groups around the sights. It is like seeing hens frantically running around the yard with their little chicks all in tow. Cameras are flashing everywhere. However, the majority of the pictures you see are of the same buildings, the same churches, from the same perspective.

When I decided to make a painting for my uncle I wanted something different. I went through the same routes a tourist would, and I knew this would not be it. That was when I took it into my mind to cross the river and see the city from a brand new perspective: from the other side of the Danube.

It is strange when you look at something from a different angle. It is like squatting down or climbing a tree and observing the same thing that was at eye level a minute ago.  You suddenly spot something interesting that you didn’t notice before, even colors and shadows appear differently.

For me it was a similar revelation. Many of the buildings presented a different side of themselves. Facades that are generally hidden either by a rooftop or a tree suddenly manifested themselves. And the lights, colors were magnificent from all the reflection that came from the river. And all this experience from just a short trip across a river!

After looking at the results of my quest I ended up tweaking my favorite just a tiny bit. There are usually many boats on the river, except for when I was taking the shots of course. As I wanted the final picture to reflect the attitude of the city as much as possible, I added the motor boat later. I think it also adds that little bit of interest to the picture that, honestly, it was lacking before. 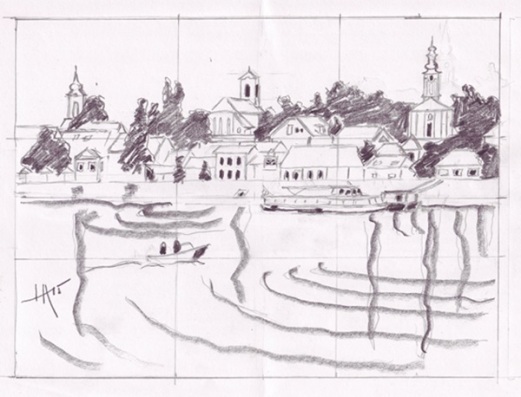 I took the final version and started my sketch. I concentrated on the major shapes, but decided to stop at that, as I want to look at its values first and foremost. It is a new approach, but I am looking forward to trying it out. Hopefully during the week I’ll have a bit of time left to see how this different perspective transfers onto a canvas. I am so excited to start this new experiment!