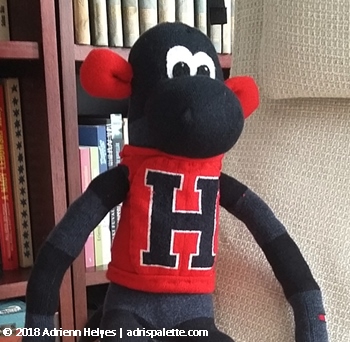 About 2,5 years ago I made this sock monkey for my nephew. At the time it seemed like it will be just a gift. However, there was a spark, a deep falling in love, and ever since then an incredibly strong bond developed between this little boy and his stripy ape.

These two have been through thick and thin. Both go to school, to sleep, to restaurants, birthday parties, the neighborhood playground. Have even participated in the recent parliamentary elections! So many times when my nephew is in the bath soaking among bubbles, so does Monkey enjoy a quick gentle cycle with mild detergent.

It is an understatement that Monkey is battered. He has been through several surgeries already. And honestly speaking, my brother fears that perhaps it is not going to survive the next one. He fears the time could come that Monkey will enter The Fluffy Gates.

So to appease a worried father and make a boy happy I decided to make a new monkey, a big brother to the original. This time around I chose a more subdued sock for the body. I initially thought its charcoal base tones would make it too severe for a little boy, so I added the little red ears as an accent. Those chunky, juicy ears are just perfect! They break the overall darkness and bring a much needed cheer to the face.

And while I was at it, I thought I’d make the difference between the two monkeys stand out even more. The big brother received a little varsity vest with my nephew’s initial. Isn’t he cute? 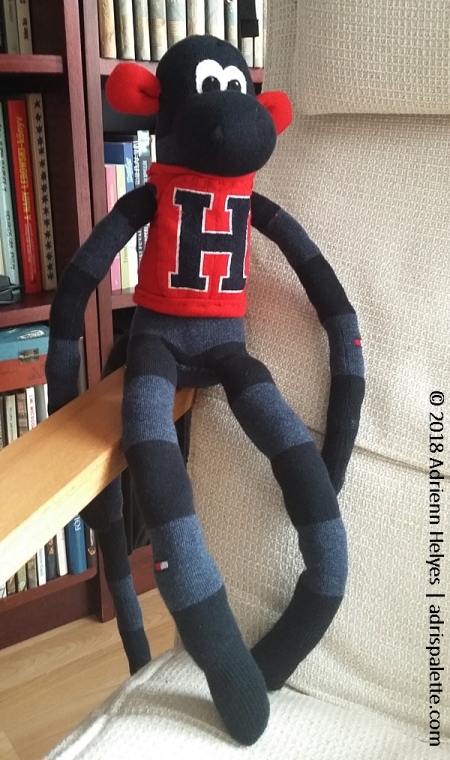 Both monkeys and my nephew sleep their blissful sleep together each night. Or rather it is the boy only who sleeps, as the apes guard his sleep incessantly and will each scream an “ooook” or an “eeeek” * should anyone approach with mal-intent. Sleep tight Henrik!

* Reference to Terry Pratchet’s Librarian in the Discworld series.