If a Hungarian meets a stranger one of the first things they will ask is what they do for a living. I don’t think it is to assess their possible income, rather a very cautious attempt to start the communication. It is considered safe ground and would not be seen as prying into the other’s life all at once. I wish we would do it differently though. Instead of beating around the bush, we should get to the point. For if we asked the correct questions we would get to know the other person much better, much earlier.

An example at hand is one of my friends, K. When I first met her we started with the cautious approach, much like the good ol’ protocol dictates. Only after our interests deepened through the common love of Tai Chi and several months of courtship passed, did we find out that both of us had a blog. And how I wish I’d have gotten to know hers earlier! For through that window a whole new light has shone in, and a whole new friend did I discover.

In her blog, The Photochromatic Proletarians she opens a world of magical surrealism in which a mixed breed dog, Bruno Escobar wears Armani, has the astrodog Laika as a lover, and just so you know, fought for the Chilean independence and as a puppy attempted to murder Pinochet. Just to scratch the surface of it all. Her incredibly intelligent humor, her surrealistic visions and the twists and turns in the storyline have shown me such a wonderful person! I wish I would have discovered this hidden side much earlier. And I also wish the blog would be in a more widely spoken language than Hungarian, so more people could enjoy it. Any plans K. to translate it? (insert grinning smiley) 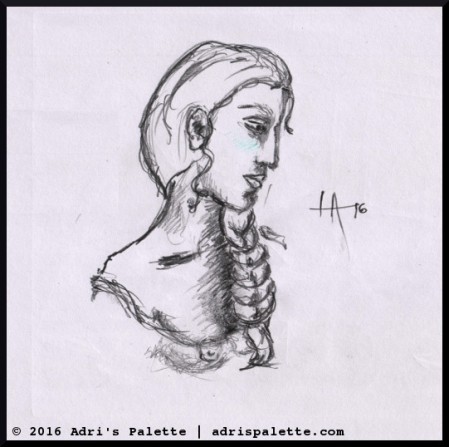 In one of her posts she mentions a painting by the (fictitious) Italian painter Angelo Bigotti, Saint Anne with savoy cabbage and a power drill or the hopelessness of the dead window. I had to read the title three times. Then again. And again. I burst out laughing because I believe it is the most brilliant title to a painting. Surreal and a slap at convention at the same time. And I saw it all before my eyes.

I decided then and there I will ask her if I may bring Saint Anne to life and bring this Dali-esque vision to the world. This is how our little collaboration started. K. supplies me the intellectual stimuli and I will bring her the saint.

I’ve drawn the portrait of the woman I saw in my vision. I like her but I want more power, more decidedness in her. Right now she seems a bit subdued, a bit forsaken in this portrait. I want the type of energy that was there in the American wartime propaganda posters. I mean if K. has shown me surreal, I accept it and raise the bet. We’ll see how it goes. But one thing’s for sure, I’m not bluffing.