My Mama loves owls. And when I mean she loves them, she LOVES them. It has started well before the general owl craze that has engulfed the fashion industry (or is this over already?) and I foresee it continuing for her forever. I made her an owl door stop once for Christmas which she refuses to use as per its original purpose. It is an ornament of my parents’ home. Full stop! So when she asked me if I could perhaps (imagine big puppy eyes here) make her a key holder, because her current one is about to fall apart, I envisioned nothing but owls. 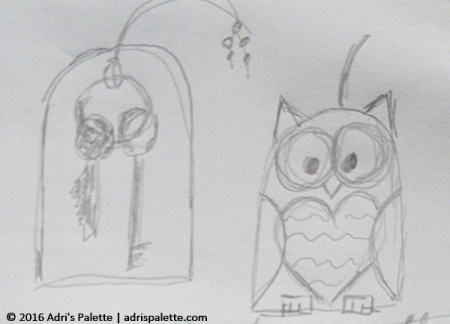 Her old key holder had a zipper which conveniently hid all her keys. I really like this idea of hidden keys, because the teeth cannot have a go at your pockets, the lining of your handbag. I looked around for some ideas and saw one that I fell in love with. It essentially resembles a bell in its purest of forms. And as the basic form is going to be simple, almost puritan, I can then go wild with the design. 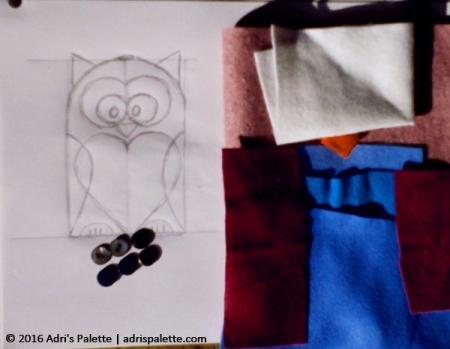 This is the idea that stuck with me at the end. A lovely little heart shaped breast that will adorn the owl. I thought about it and decided not to embroider it, rather stack three hearts on top of each-other in different sizes and hues of the same color. I even found buttons that I think will work quite well as eyes for the hooter.

And then came the time for cutting. I realized I wasn’t quite happy with the blues I chose for the breast originally. I don’t know what it was exactly that changed in 15 minutes, but by the time I had the scissors in my hand I preferred the reds. And by the way it goes much better with the  polka dot fabric I chose for lining. I ended up also abandoning the idea of buttons for eyes and simply decided to use little circles of felt as pupils. (Did you know you can use a hole puncher on felt too? I mean WOW!)

So this is the final design I will stick with and will be working on over the weekend. And at break neck speed I might add, because I do not have much time. Her birthday is in a few days and I’d like to have it all ready. I’d really like to see the design become reality and see if it indeed will be as practical as I imagine it to be.