Some time ago my father and I had some true DIY time together and made some frames for canvas I had lying around. As we were sawing the frames, chipping away, small pieces of framing material fell off. I quickly put them together and suddenly had the cutest little canvas in my collection. When I decided to paint the Padstow scene, this is the canvas that I immediately wanted to use.  For two reasons actually.

For one, I really wanted to work on a smaller scale this time around.  I wanted to see whether the technique, the style, or the brushes I used until now had to change. Also, I recently read Will Kemp‘s post on material addicts, a highly recommended read might I add. I felt quite uncomfortable, because yes – I have to admit – I am guilty as charged. So as per his recommendation I started thinking of using and adapting the minimalist approach: using just two brushes for the entire painting. So with these thoughts in mind I started my minimalist acrylic journey. Gulp! 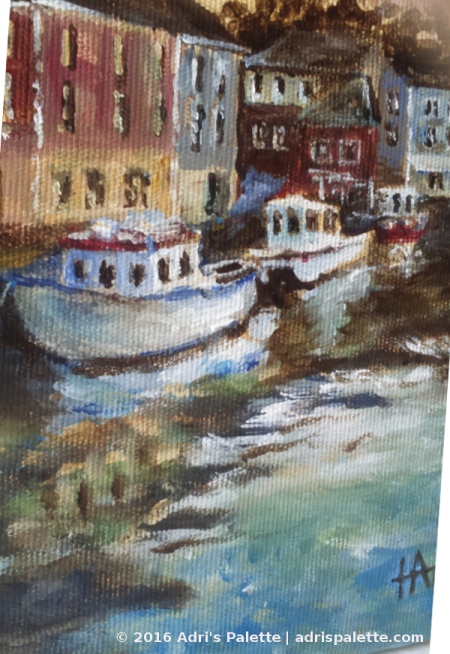 All in all I have to say the experiment was quite invigorating. The fact that I was only using one round an one flat brush actually made me focus more on the qualities I could achieve with these.  I found myself being more aware and creative with what I had and focusing less on what I did not. The different strokes I thought I could not have I did get at the end. And with all of this came speed. I found the picture coming together quicker than I expected. My thought process had to keep up with my hands in fact. And one of the advantaged of getting the speed is that I did not have time to obsess about one particular part of the painting. So as much as I thought the water in the Cornish harbor could not be surpassed in its reflections and its beauty, I think I might change my opinion. For the color, the playfulness and depth I achieved here is what truly makes this scene in Padstow one where I could loose myself as much as I am sure I would loose myself in the real life beauty of Padstow itself.

3 thoughts on “Dusk falling on Padstow”