The game is on

My husband’s favorite gifts are those I make for him. From picture-books of our vacations to paintings of harbors we could (should) one day visit, these are the things that really move him. So for his birthday this year I had the same vision: to make something really special for him.

One of our favorite pastimes together – besides watching the good ol’ Sunday football match -, is playing board games. We love so many, from the easy family ones to complex strategy games. But all of these have one thing in common: they have a board to play on (hence the name), and will usually take at least 1 – 1,5 hours to play. Hence this pastime is a weekend pastime only. So I thought I’d make something that will expand our options, a card game. One that could be played in less time, and thus more often.

Well, easier said than done. I think I spent the last three months thinking about options, ideas. I thought I had something I liked one day, which I threw out as worthless the next. There were lots of instances of doubt, a few moments of clarity. At the end I decided to take the concept of a card game we played a lot as kids and spice it up with something extra. The game I used as inspiration was Hearts. And the spice, the cartoon we loved, Zdeněk Miler‘s Krtek, the little mole.

In the cartoon the little mole had four main pals: the hedgehog, the frog, the rabbit and the mouse. Since I was to create a stack of cards in four suits, I thought it would be perfect to use them. I found a picture that I liked with the five friends and used the image of these to create the playing cards. 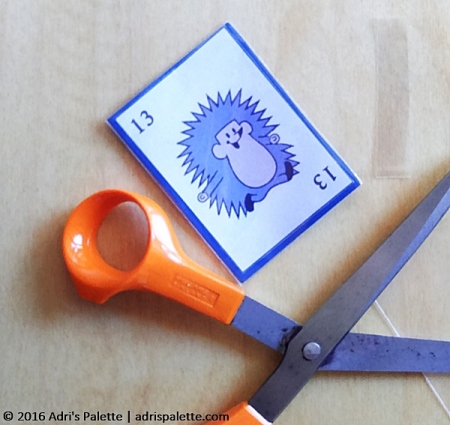 To make sure they were not see-through (and there was not going to be any cheating) I glued the pieces of paper onto a light blue cardboard. Then I cut them to size. All 60 of them. One by one. Even though I used a brush to apply the glue, by the time I was finished my fingers were covered in one sticky goo. Thank goodness for water soluble formulas!

I decided that I’d use a protective sleeve for these cards. I knew that as we played with it it was going to show signs of wear pretty quickly. I mean, the materials I ended up using would not be too durable on the long run. The only issue I had was that as I cut the cards with scissors (and not in the best light conditions, might I add), they were not exactly even. So once I was putting on the sleeves, I had to cut the odd one millimiter off here, the 1,5 millimeter off there.

But in the end it was worth it! The cards are pretty nice. I feel the sleeves will protect them from anything… OK, no drinking and playing, please! But putting the joke aside. The cards are easily shuffled, and they have the sort of slip that you are used to when playing with cards that have a plastic coating. They are not even and perfectly square, but that is what adds that second layer of spice to the game. 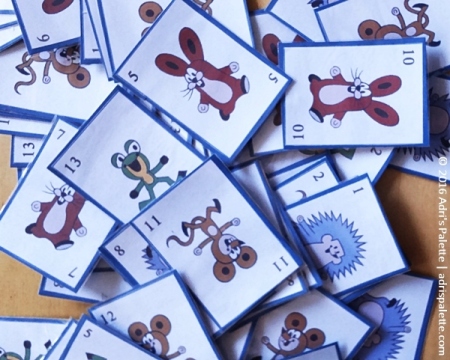 Creating the cards themselves was the biggest effort in the creation of this card game. There were so many of them, sometimes I felt they were multiplying themselves as I was gluing them together. But the end result is everything I imagined it to be: functional, playful, and that vintage feel that reminds us of our childhood. So what does the entire game look like? Well, I decided to leave you with a bit of anticipation. As if it were your birthday… So come back and see its box and all of its accessories in Friday’s post. See you then!

2 thoughts on “The game is on”